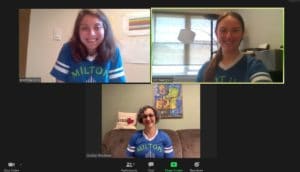 This year, the last day of in-person classes at Milton Gottesman Jewish Day School of the Nation’s Capital, a Federation partner agency, felt similar to many endings and new beginnings. This transition point, however, was in the middle of March, when the students were already settled in their rhythms and routines, the end of the school year was still months away, and no one expected to be making any big changes. But the coronavirus pandemic suddenly forced schools throughout the country onto a different track.

Much of that day’s focus was on packing. Jessica Friedman, a third-grade general studies teacher, describes stuffing her students’ backpacks with Chromebook computers, whiteboards, markers, books—“and anything else that would fit.”

The teachers also emphasized that this wasn’t a “goodbye”—rather, they should all say, “lehitraot,” Hebrew for “see you soon.”

There was a general sense of anxiety and uncertainty—anxiety over leaving behind something comfortable and familiar; uncertainty over what lay ahead.

“We saw the confusion and fear in their eyes,” Jessica says.

The teachers’ lives were changing, too. Jessica and her fellow third-grade general studies teachers, Marissa Gally and Jen Margolis, were leaving behind the structure of a school and the physical presence of their colleagues. All of a sudden, their homes were becoming unfamiliar terrain.

For Marissa, who began working at Milton in the fall of 2019, switching to a work-from-home situation was not how she imagined ending her first year at a new school. “Living alone has been hard for me [during this time],” she says.

Jen was preparing to return from maternity leave when Milton announced it was moving to online-only education. She returned to teaching early so she could be with her students during this difficult transition. “There are many things that are challenging about working from home with an infant,” she says. “Sometimes, I hear [my daughter] cry while I am working with the students and wish that I could be in two places at once.”

But even as so much had changed because of the coronavirus pandemic, these teachers were able to draw strength from what stayed the same—and provide strength by creating stability for their students.

Jessica, Marissa, and Jen stress the team-oriented nature of teaching and how that didn’t change despite living and working in isolation. “Nurturing the whole child is one of the foundations of Jewish Day Schools, and it takes an entire team of teachers, administrators, and staff members to do this,” says Marissa. “It was important to us to continue to see every child as an individual and not only a square on a screen.”

Before distance learning officially began, the teachers were organizing non-mandatory Zoom sessions for their students. Nearly all of the students showed up (most in pajamas) and brought with them a snack, their families, and something they wanted to share with the group.

In addition to supporting the students’ emotional needs during the transition to a digital environment, Jessica, Marissa, and Jen have also continued the educational curriculum they began in the classroom—with some adaptations.

The overarching theme for the third-grade class at Milton is the geography of the United States. In the first week of school, students are assigned a state to learn about for the entirety of the year, culminating in a big exhibition. Rather than canceling the fair, the teachers came up with a plan to conduct it virtually, encouraging the students to get creative as they presented their state to their classmates and teachers over Zoom.

“It was important to us that the passion the students have developed for their states, and their learning more generally, continued to be fostered, even as we moved online,” Jen says.

While many of their lesson plans had to be adapted for distance learning, the teachers were also gratified to see how many of the skills they try to engender in their students in the classroom are actually being enhanced more rapidly under these new circumstances.

“We have been teaching such important skills these past few months, skills that we always fostered in the classroom, but the situation has taken to the next level,” Jen says. “We are helping the students develop resiliency, persistence, and the ability to self-advocate like never before.”

Jessica, Marissa, and Jen are grateful for the opportunity to serve their students and their community—and are appreciative of the role other teachers are playing, both at Milton and in other schools.

“As a team, we took the approach that our role as teachers were our way of helping the community during the pandemic,” Jessica says. “I imagine our stories are similar to teachers around the globe. Teaching is a profession of the heart, and I’m always drawn to being there for my students, their families, and the school community.”

The Jewish Federation is proud to partner with six local Jewish Day Schools serving our Greater Washington community, including Milton Gottesman Jewish Day School of the Nation’s Capital. As our community continues to weather the coronavirus pandemic and its ensuing challenges, the support of donors to Federation’s Annual Campaign has ensured that our schools and other partner agencies are equipped to meet their needs—and to be agile in their work during this time of crisis.